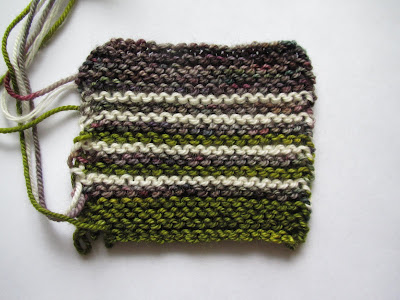 I wanted to highlight the prettiness of the Fierce Snake in its own garter section, so I started with it as the main color. However, this layout didn't sit too well with me. I thought the Nude stripes were too bright in contrast with the other colors. So I tried again with a different combo I had considered. 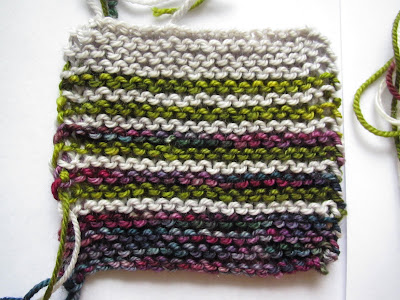 This one felt better to me, but I love the grey and purply colors so much together on their own, the green felt out of place. I'm going to save the GSSB and A&M for a 2-color project where their combined awesomeness can really shine.

Here's what I have decided with on my third attempt: Main Color - Nude, Contrast 1 - Common Emerald Moth, Contrast 2 - Fierce Snake 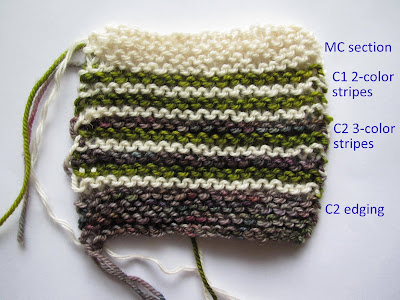 It's amazing what a difference the arrangement makes! The Nude no longer sticks out like a sore thumb, I feel like it plays with the other two colors much better here. And you still get to see lots of Fierce Snake goodness in the bottom edging instead of at the beginning. I have to think on it a little bit more (should I swap places so that Fierce Snake is C1 and Common Emerald Moth is C2?) but I'm pretty sure I'll stick with this. Also, the last two attempts were done on US 7 needles instead of US 6 like the pattern calls for, and I think I like the fabric better for Bugga on 7's. This color combo almost has a 70's feel to it... must be the green. I think I like it.

Or should I say, I think it's groovy?

Labels: Bugga
Email ThisBlogThis!Share to TwitterShare to FacebookShare to Pinterest