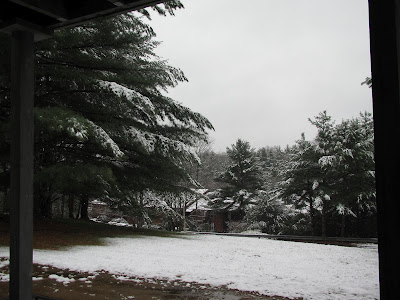 We got one big snowstorm in October, a little mini one sometime in February, and now this little wet and slushy dusting today. What's going on with this winter?? I can't really complain because I hate driving in snow and I have a super long commute now, but it's still odd. BUT, that super long commute will most likely be a thing of the past in two weeks! The Fiasco and I went apartment hunting yesterday afternoon and found one for not much more than we pay now in his hometown (so he's really excited about it) that's only about 20 minutes from my new job (instead of an hour and 20 minutes, so I'm really excited about it). And it has a flexible lease, where we can leave whenever we want, which will come in handy in September when we'll have no idea where either one of us will be working! We still have to finalize the details, but it looks like I'll be moving in two weeks, right in the middle of a really crazy fieldwork schedule! What's nice is it didn't smell funny and it isn't a ground-level apartment, so hopefully we'll avoid some of the nasty issues we've been dealing with in our current place this past year.

Someday, I want to live somewhere for more than a year or two. Someday.

Anyway, in knitting news, I have a teeny tiny start of a scarf: 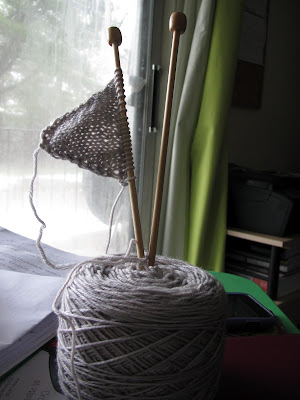 I was inspired by this beautiful project on Ravelry, which combined two coordinating colors of Bugga in different-sized stripes and made what looks like a lovely, wide, lightweight scarf. I coveted it instantly. So I'm going to use the gorgeous light grey as a base color, and stripe it with acid green, bright purple, and deep teal. I still have to figure out how the stripes will work but in my mind it looks awesome. :)

And... socks. Socks of shame. I have finished only 1 of 4 pairs of my planned socks for March. If you notice in the ticker at the top of the blog, I reduced my goal for the year from 25 to 20. That still means I have to finish at least 2 pairs a month for the rest of the year, so it will still be a challenge, but when I made my goals initially I thought I was going to have a few months off while I looked for jobs, but instead I got a job immediately which is of course great, but screwed up all my knitting plans! So I will be revising my sock plans. Oh well. I'm pretty sure that I'm the only person who cares, except my poor Fiasco who is still waiting for his pair. It's coming, it's coming!
Posted by Unknown at 10:52 AM