You see a Here and There hat below. You think the hat looks kind of ok, right? 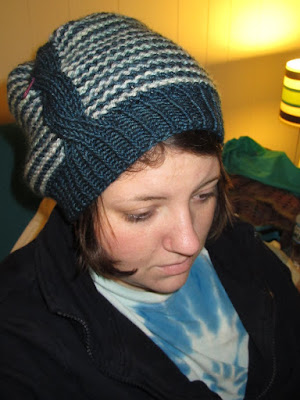 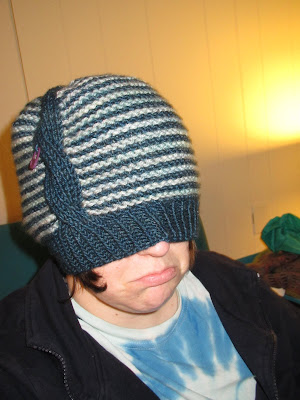 This hat came out to be ginormous. Waaaaaay way way way way too big. It's supposed to be slouchy, but not hugantic. It even eclipses my biggest, floppiest, slouchiest hat ever: 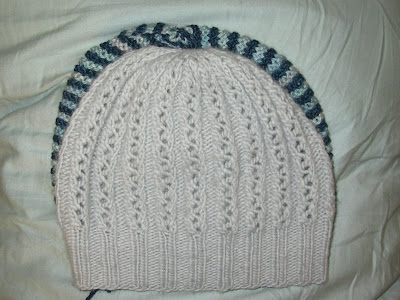 Uncool. Now, this is not the design's fault, really. Except the design didn't help much, either. It didn't specify at which point in the pattern repeat you are supposed to begin decreasing for the top of the hat. It gives a length, but that's needlessly wishy washy and inexact. This matters because there are only so many stitches on the other side of that cable and eventually those will be "decreased away" before the hat ends if you don't finagle things correctly. Since I had modified the hat (went from 94 sts to 90 to make it slightly smaller) I was going to modify the decreases. I had assumed that the pattern decreased evenly all the way around the hat. So I decreased at 5 evenly spaced points when it made sense to for the cable to complete correctly, and that is where I went wrong. 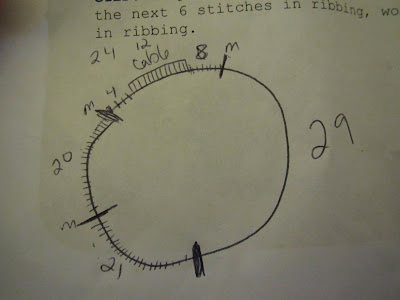 This little diagram represents the placement of the markers for decreasing as far as I could tell from the rather murky directions. (Yes, I really did have to draw a roadmap to illustrate the directions because I could not visualize them otherwise.) The bottom line is the first marker. Then there are 21 stitches before the second marker, 20 before the third, 24 before the fourth including the cable, and 29 between the fourth and first markers. WHAT THE HECK?! Why are the decrease points distributed so unevenly? I do not get it. It makes no sense.

I'm getting really tired of having to rework hat patterns. Hats aren't hard and the only tricky bit is the decreasing-while-maintaining-the-sitch-pattern and when that isn't done or described well in a pattern I paid for, it bugs me. Grrrrrr. Pretty hat, though. Ripping back and decreasing sooner on my own terms will commence when I get over being mad at it. Oh, and grrrrrr again for good measure.
Posted by Unknown at 2:37 AM

Labels: hats
Email ThisBlogThis!Share to TwitterShare to FacebookShare to Pinterest